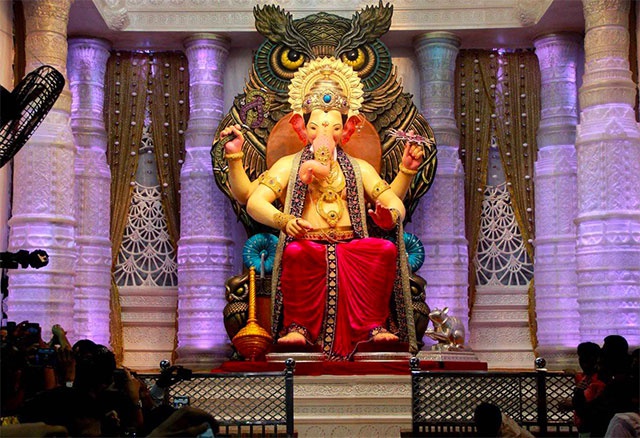 You’d see this person walk in, potential prashaad in hand and an expression of devotion on their face. They’ll marvel at the Ganpati idol you’ve brought home and the surrounding decorations. As common practice dictates, they’ll pray, place their offerings before the deity and close their eyes for a minute. This person will then proceed to engage in a conversation that follows a set template: “Did you do this decoration yourselves or ordered it from somewhere?”, “When is the Visarjan?” “Where did you get the idol from? The eyes are so expressive!””This weather is atrocious, isn’t it?”

And then, then comes the flex. They’ll wax eloquent about the number of homes they’ve visited for darshan, the ones that are still pending. This is done while smoothly pulling out their mobile phone, so that they can show you photographic evidence of their itinerary for the next few days. And then, there will be photos. For Facebook, Instagram, and to show the hosts of the next house they’ll be visiting as they go darshan-hopping.

Back in 1893, when Lokmanya Tilak decided to change the settings of Ganesh Chaturthi from Private to Public, this probably wasn’t in his wildest imagination. What was meant to be a well-organised cover for public meetings in the guise of a festival, right under the nose of the British Raj, has now turned into an event so publicised, people Instagram LIVE their home aarti.

And why’s that bad, you’ll ask? Well, it isn’t bad. Just like it isn’t bad to watch TV while eating. Or texting while driving. Or taking a selfie while precariously perched dangerous grounds. It’s fine until it defeats some bigger purpose. Which in this case is the worship of the deity who’s every body part is meant to deny excess. Ironically, the way we celebrate Ganesh Chaturthi these days reflects nothing but excess.

We’re not event taking the sarvajanik pandals into consideration here. That’s a whole different, never-ending rant about how their practices degrade not just the environment but the Trunked God himself. If we believe that Lord Ganesha does indeed come down to earth and inhabit the idols we worship during these 10 days, I refuse to believe that he chooses these commercial hubs where devotees are literally shoved out of the way. They barely get a minute before the deity they’ve come for far and wide to see.

Oh, but pics or it didn’t happen, right? So they do get time to click a few pictures while they wait for hours in the queue. And if you’re someone who can do jugaad for entry or afford outrageous donations like a 100 kg gold modak, then you secure VIP entry into the Almighty’s worldly halls. In such places, faith may dwell, but God wouldn’t.

No, we’d rather talk about Bappa’s stint at our own homes. It is beautiful to watch this Hindu festival exist and spread beyond religious boundaries. The festival is now a matter of faith. But lately, things like the decor, size of the idol and playing the perfect host to all the guests that visit has become a merciless fad. The new trend is to bring home eco-friendly Ganesha. But the decor is still thermocol, food that remains uneaten by guests is still wasted. Even for smaller idols at homes, people organise a DJ and a dancing procession, bursting crackers on the way, and thereby causing every kind of pollution possible.

It’s not uncommon to witness Mumbaikars get legit terrified of Visarjan days because they know traffic would be horrible. And if it rains like it has been for the past few years, that terror gets amplified. Bappa will get home in time for the mahurat. But when will we?

Festivals have always had the element of entertaining and food. Ganpati himself is a huge foodie. But he’d absolutely frown at the idea that so much food is getting wasted in his name! As someone who brings Ganpati home every year, I believe he’d hate to see the women of the household often confined to the kitchen, serving ‘chivda’ and ‘prashaad’ to the guests rather than spending time with the family in his presence!

Picture this: Bappa checking in on Facebook—celebrating my big day with 49 others—but still being alone in his fancy decorated seat, while we, his devotees, are serving an entirely different God—our personal agenda.

Let’s be real, who is all this really being done for? To uphold our own prestige? For people who drop by only so they can post a tally count on social media? Or for Bappa, who’d rather you drop all these shenanigans, gather around as a family, sit before him and pass around some goddamn modaks? And then, when you’ve sung the aarti (or played that Amitabh Bachchan, Sonu Nigam, Suresh Wadkar version on your phone), you can go ahead and click that selfie.

Bappa won’t mind at all, he’s chill like that. Ganpati Bappa Morya!