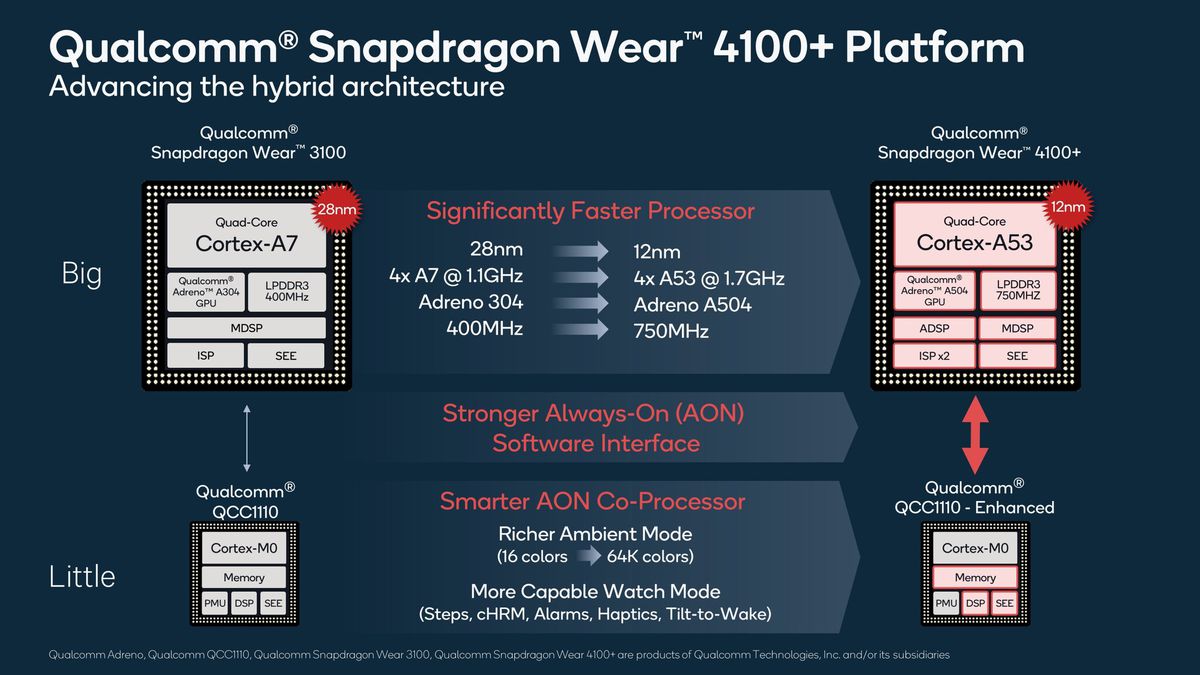 In this fast-moving world of technology, it surprisingly took Qualcomm almost two years to announce an update to its weary Snapdragon Wear 3100 platform. While we can argue whether these developments are too late or not, the new Snapdragon Wear 4100 series of chipsets is likely to make its way to next-gen Android smartwatches.

With the Wear 4100 platform, Qualcomm not only promises lofty improvements in performance-related aspects but also promises improvements in battery efficiency. Considering that the Wear 3100 was only an iterative upgrade to the Wear 2100 (launched in 2016), the Wear 4100 series should bring about a much-needed hardware-boost to Wear OS smartwatches.

In terms of performance, Qualcomm says the Snapdragon 4100 and Snapdragon 4100+ will offer performance boosts up to 85% which will result in a snappier and nimbler user experience. This is a much-needed improvement and something I mentioned in my review of the Fossil Gen 5 smartwatch that was powered by the Snapdragon 3100 processor.

A large part of this performance improvement on the Wear 4100 series is due to Qualcomm using a 12nm manufacturing process which is a definite improvement over the 28nm manufacturing process of its predecessor. The processor has four A53 CPU cores and is paired with an Adreno A504 GPU which offers up to 2.5 times the performance of its predecessor.

For watches using LTE, the Wear 4100 also has a more power-efficient, capable modem which should allow better connectivity and faster call-connect times.

The Snapdragon 4100+ differs from the Snapdragon 4100 in that it has an additional co-processor that aims at improving the ambient mode experience. With this co-processor, watches using the chip will now be able to display more colours (up to 64,000) and have support for features such as continuous heart-rate tracking, alarms, haptic feedback, and step tracking, in ambient mode.

Previously, watches had to rely on the primary processor for such features which would end up consuming more battery. But with the help of this co-processor, smartwatch manufacturers could now offer enhanced functionality even in power-saving modes.

In a nutshell, the Wear 4100 platform is a considerable upgrade and is a much-needed upgrade that’ll help Wear OS-powered smartwatches compete with other watches using more efficient and capable processors. In fact, a couple of smartwatch brands – Mobvoi and Imoo – have already announced their upcoming watches that will be powered by the Wear 4100 platform.

Now what remains to be seen is what Google does with Wear OS to invigorate the interest of consumers and whether Google will actually lead the charge with a ‘Pixel Watch’ of its own.