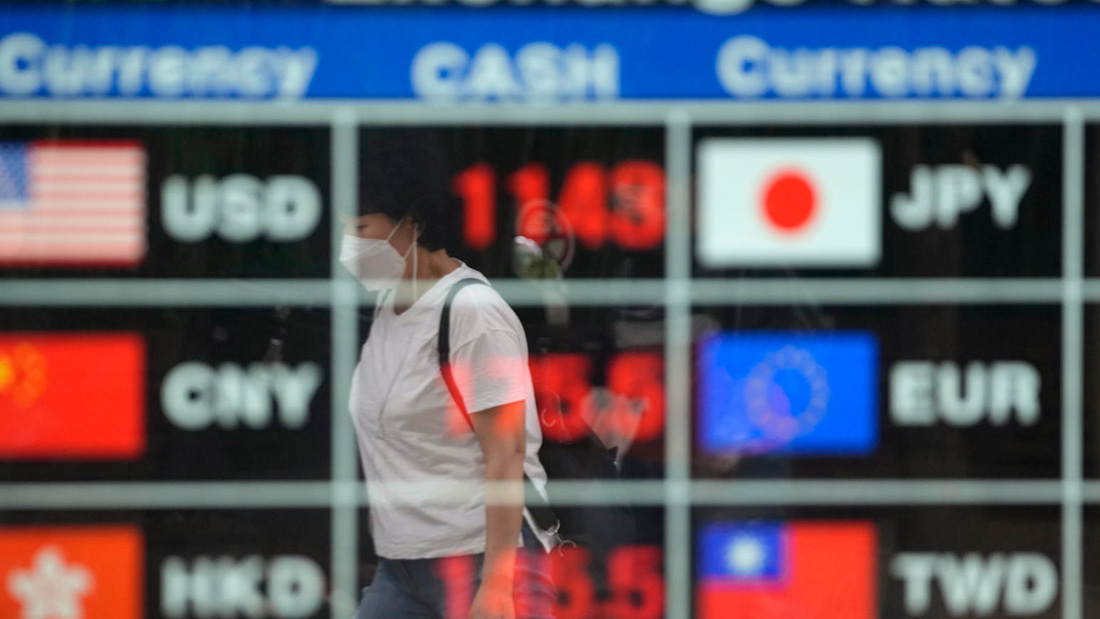 Asian shares were mixed Thursday as caution set in among investors following another wobbly day of trading on Wall Street.

Asian shares were mixed Thursday as caution set in among investors following another wobbly day of trading on Wall Street.
Japan’s benchmark Nikkei 225 gained 0.2% in morning trading to 28,123.67. South Korea’s Kospi was little changed by slightly higher at 3,220.74 after jigsawing earlier in the day. Australia’s S&P/ASX 200 lost earlier gains to be also little changed at 7,584.00. Hong Kong’s Hang Seng declined nearly 0.2% to 26,619.24, while the Shanghai Composite slipped 0.1% to 3,530.02. Worries in the region remained about the recent regulatory crackdown in China. Analysts said the next target appeared to be the online insurance industry. “This comes amid increasing COVID-19 risks, with further tightening of restrictions in several cities potentially impacting the services sector near-term,” said Yeap Jun Rong, market strategist at IG in Singapore.COVID-19 infection cases are also surging in Japan, where a state of emergency has been in place, even as the nation played host to the Tokyo Olympics and plans to do the same for the Paralympics, opening later this month. Cases are reaching record highs in Tokyo, as well as several other regions. Medical officials say hospitals are getting stretched thin.

“On the COVID-19 front, worries over growing restrictions are becoming a cause of concern. Growth expectations in the region will likely take a hit in the coming weeks. The recent resurgence of the virus will probably slow the economic recovery,” said Anderson Alves, a trader at ActivTrades.On Wall Street on Wednesday, banks and industrial companies helped lift stocks mostly higher, pushing the S&P 500 and Dow Jones Industrial Average past the record highs they set a day earlier. Nearly three-fourths of the companies in the benchmark index notched gains, including energy stocks, which rose along with the price of crude oil. Health care was the only sector to fall. After a stumbling start to the week, stocks have been moving higher on the back of strong earnings and better-than-expected economic data.

Traders got a dose of decent economic news Wednesday when the Labor Department said that consumer prices rose 0.5% from June to July, down from the previous monthly increase of 0.9%. Year over year, consumer prices have increased a substantial 5.4%. Investors’ relief that the June data didn’t show a bigger increase in inflation may have kept stock prices moving higher, said Sam Stovall, chief investment strategist at CFRA. “Our estimate was that June was going to be the peak month in inflation, and it appears that it was,” Stovall said. The S&P 500 index rose 10.95 points to 4,447.70. The Dow gained 220.30 points, or 0.6%, to 35,484.97. Both indexes also set all-time highs on Friday and Tuesday.

Weakness in some technology stocks helped pull the Nasdaq composite slightly lower. It fell 22.95 points, or 0.2%, to 14,765.14. Smaller company stocks rose. The Russell 2000 index picked up 10.98 points, or 0.5%, to 2,250.34. Bond yields mostly edged lower. After reaching 1.36% in the early going, the yield on the 10-year Treasury slipped to 1.33% from 1.34% late Tuesday. Investors’ concerns about inflation and uncertainty about the Federal Reserve’s future plans to ease up on its support for low-interest rates have been hanging over the market. While the headline figures may seem bad, most of the rise in consumer prices has been tied to very specific goods that are not expected to impact the long-term health of the economy, like used cars, building materials, and hotel rooms. These items came into short supply during the pandemic, and the increased economic activity has made prices for those items rise faster than usual.

The Federal Reserve has repeatedly said it believes any increase in inflation would be temporary and largely a result of the supply disruptions that happened because of the pandemic. Investors will get another inflation snapshot Thursday when the Labor Department issues its July wholesale price data. Banks made some of the strongest gains Wednesday after bond yields initially edged higher, which benefits lenders because it allows them to charge higher interest on loans. Bank of America rose 1.3%. Industrial stocks also helped lift the market. United Rentals climbed 5% for one of the biggest gains in the S&P 500. Traders had a mix of earnings and corporate news to review. Coinbase, a platform where traders can buy and sell digital currencies like bitcoin, rose 3.2% after reporting strong growth in the last quarter.

Weight-loss program operator WW International plunged 24.6% after reporting disappointing second-quarter financial results, while hamburger chain Wendy’s rose 3.7% after raising its profit forecast for the year and increasing its dividend. Meanwhile, the New York Stock Exchange will begin requiring on Sept. 13 that anyone entering its trading floor show proof that they’ve been vaccinated against COVID-19, according to an email obtained by The Associated Press. Persons granted an exception to the rule because they can’t get vaccinated due to qualifying medical or religious reasons will be required to show they tested negative for the virus three times a week. The policy change, which applies to anyone with access to the NYSE or American Options Trading Floors, comes as alarm grows over the rapidly spreading delta variant. In energy trading, benchmark U.S. crude added 4 cents to $69.29 a barrel. Brent crude, the international standard, added 6 cents to $71.50 a barrel. In currency trading, the U.S. dollar inched up to 110.42 Japanese yen from 110.41 yen. The euro stood unchanged at $1.1738.