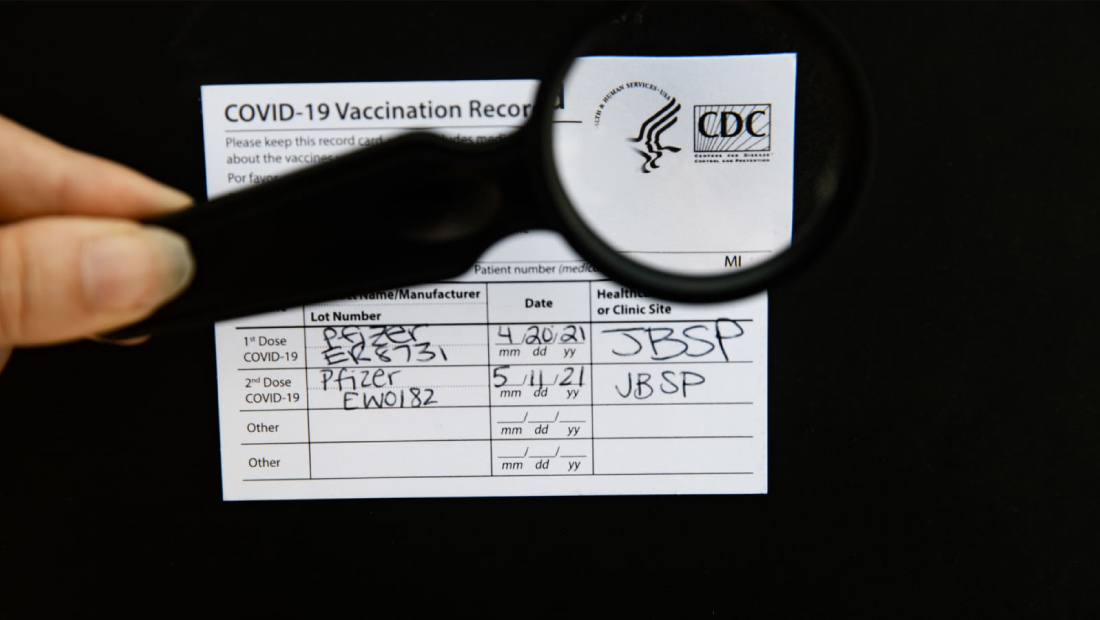 The online market for fake Covid-19 vaccination cards is booming

The online market for fake COVID-19 vaccination cards is booming.

Thousands of online sellers are claiming to offer near-perfect copies of the cards at prices that have risen sharply in recent weeks, with some now selling a single card for hundreds of dollars. While it’s unclear how many cards successfully make it to people who try to buy them, the federal government is intercepting reams of them.

A spokesperson for U.S. Customs and Border Protection said the agency has intercepted thousands of packages of fake cards from China that “we basically stopped keeping track because there were so many.”

Almost all the seized packages came from Shenzhen, China, the spokesperson said.

The FBI warned in March that buying, creating, or selling fake vaccination cards are illegal, and the agency has made at least one high-profile arrest of a Chicago pharmacist who was allegedly selling them on eBay. All major American social media and commerce sites, including Etsy, Facebook, Amazon, and Twitter, have banned the sale of the cards.

But users offering cards for sale are rampant on the messaging app Telegram, headquartered in the United Arab Emirates, and which rarely moderates user content. While Telegram is still sparsely used in the U.S., it’s become more popular in the past year, especially with the far right. In January, its founder, Pavel Durov, announced the app had reached half a billion active users worldwide.

Real versions of the cards, created by the Centers for Disease Control and Prevention to help people keep track of their shots, are free for whoever is vaccinated, which is also free. But since the U.S. doesn’t have a deliberate national system to validate who’s been vaccinated and only a handful of states have rolled out digital verification, the cards have inadvertently become one of the best ways to show evidence that someone’s been vaccinated.

Researchers at the cybersecurity company Check Point have identified around 10,000 Telegram users claiming to sell fake vaccination cards, Brian Linder, the company’s emerging threat expert, said.
After President Joe Biden signed two executive orders last Thursday that drastically increased the number of Americans who would have to get vaccinated to stay employed, the cost of black market fake cards roughly doubled from $100 to $200, Linder said. Sellers almost always ask for payment in bitcoin and often request specific personal information that wouldn’t be necessary to mail a blank fake vaccination card, he added.

“What people don’t realize of course is, God only knows where their identity and their financial information are ending up,” Linder said.

Representatives for Telegram didn’t respond to a request for comment.

Three self-proclaimed vaccination card sellers, contacted by NBC News on Telegram, said that they demanded bitcoin payment for cards. Each asked for more personal information than would be necessary to mail a blank card, like date of birth and telephone number, making a verity of claims. about why they needed such information to “register” a buyer’s information. One said the information would be sent to a doctor, while another said it would go to the CDC. None of the three were willing to explain what such registration actually meant.
While it’s unclear how many sellers on Telegram actually send the fake cards, Customs and Border Protection has intercepted “thousands” of them in recent months, a spokesperson said in an emailed statement.

“Unvaccinated individuals who use fraudulent vaccine cards put themselves, their loved ones, and their fellow Americans at risk of contracting COVID-19,” the spokesperson said. “Additionally, the unauthorized use of an official government agency’s seal (such as that of the Department of Health and Human Services or the Centers for Disease Control and Prevention) is a federal crime, and may be punishable under Title 18 United States Code.”