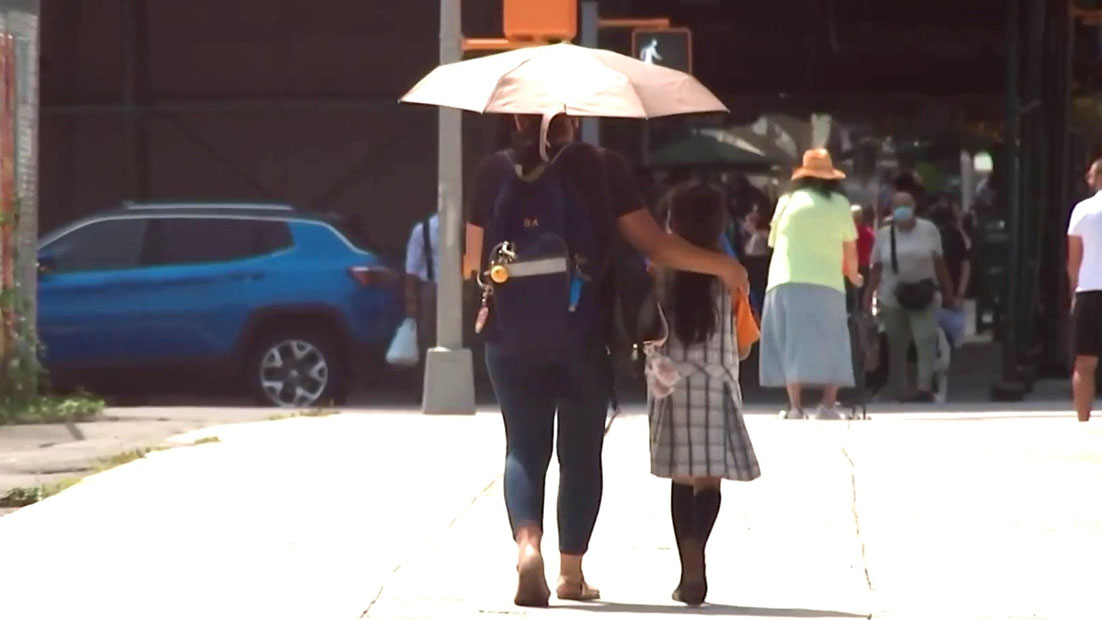 Millions of Americans are under an extreme heat advisory recommending they avoid strenuous activity and stay well hydrated.

Millions of Americans are under an extreme heat advisory recommending they avoid strenuous activity and stay well hydrated — but for some restaurants and stores, the heatwave threatens worker safety and guts traffic into stores, leading to a dramatic downturn in business. “We decided yesterday, as we were looking at the forecast and extreme heat, to close over these two days for dining,” Greg Gardner, general manager of J. Timothy’s Taverne in Plainville, Connecticut, told NBC News on Thursday. “We’ve had a bunch of these spells and witnessed the kitchen guys really taking heat from the stress of it all and stress on their bodies.” Connecticut is among 34 states across the country under a heat-related warning as temperatures soar 10 to 15 degrees above regional averages in some places. But inside kitchens, temperatures can reach 105 to 110 degrees, increasing the risk of heat exhaustion, according to the Department of Labor. A year into the pandemic and amid a shortage of workers willing to work in the restaurant industry, Gardner said he’d rather lose sales than lose staff.

“Of course there’s a financial hit — you’re talking about two days of revenue,” he said. “But a bigger hit for us would be working the guys in an untenable situation and losing the guys we do have because there is no one to replace them… They are the heart of what we do.” One restaurant in Portland, Oregon, told social media followers it closed Thursday “to keep you and our crew safe during this incredible heatwave.” A coffee shop in Tewksbury, Massachusetts, said it will be closed for a second day Friday because of the heat. A pizza place in Junction, Vermont, said it will remain closed Friday because of the heat. “The hotter it gets, the more it’s about need-based shopping,” said Evan Gold, executive vice president of the weather intelligence firm Planalytics. “So, discretionary places tend to take a hit and need-based businesses go up.” Weather-driven demand across the country has spiked by 21 percent for air conditioners this week compared to an average week, according to Planalytics. Demand for fans increased 15 percent and water toy demand is up 10 percent, according to the firm. Demand for hot coffee fell by 2 percent and lawnmowers by 3 percent.

While hot weather might be good news for the cooling unit industry, it strikes another blow at the already struggling restaurant industry. The pandemic led to the closure of more than 110,000 restaurants last year and nearly 2.5 million jobs were lost, compared to pre-pandemic levels, according to the National Restaurant Association. Restaurant and foodservice industry sales also fell $240 billion below 2020 projections. “If we want to survive and come through this thing we need to get people back to work,” Gardner said. Workers with J.Timothy’s Taverne all make anywhere between $17 and $25 an hour, he said. The restaurant is just breaking even because of the rising cost of labor, shorter hours, and higher price of goods, including chicken wings which make up about half of the restaurant’s food sales. The extreme weather in Northwestern areas like Portland has added to the mounting financial pressures on businesses in the food industry. Erica Montgomery, who runs a food cart called Erica’s Soul Food, told NBC News she stayed home Thursday because of the heat. A few weeks ago Montgomery worked out of her food cart as temperatures in the city rose to 116 degrees. But after that experience, she said she’d rather lose a day in sales than risk her health.

“I tried to be open during the first part of that [heat wave] but honestly I felt like I was going to die,” said Montgomery, who makes about $1,000 a day running a food cart. “I couldn’t think straight.” Montgomery, who is a single mom, said her food business is her only source of income. During the July heatwave, her neighborhood lost power, spoiling all of her products. Earlier in the year when Oregon was gripped by an icy storm, she lost power again and was forced to toss out her food. She’s now considering buying a generator and A/C unit for the cart. “This is the first time I’ve sat out of work because of the heat,” she said. “It’s become kind of an uncontrollable obstacle.”