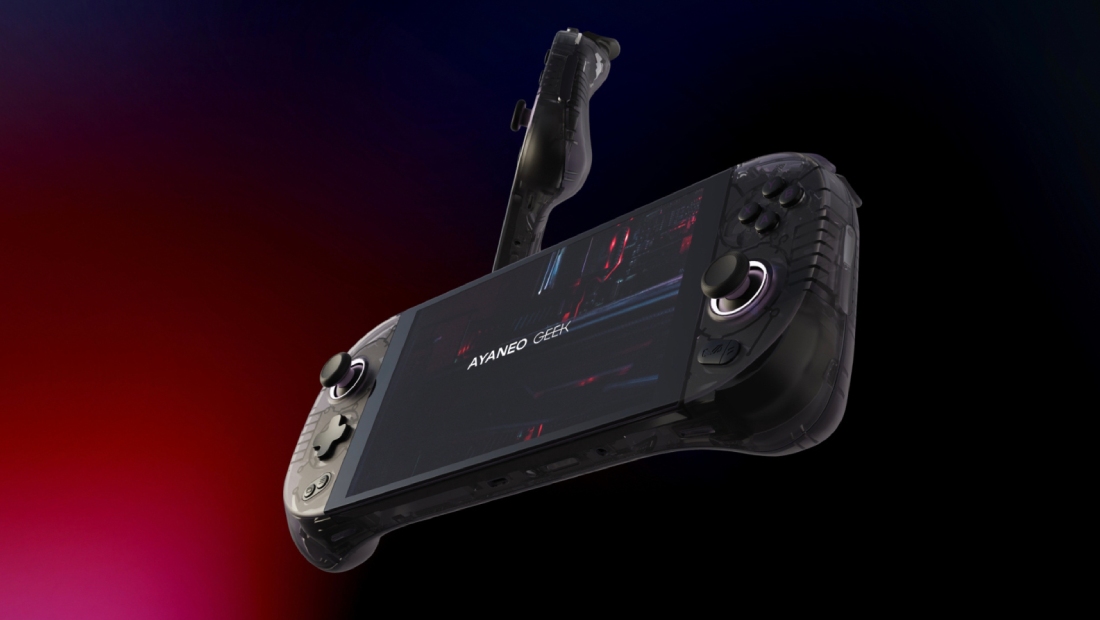 It’s been a bumper year for gaming on the go. For a spell, it kinda felt like Nintendo was the only name in town, but it’s since become one of the more exciting corners of gaming.

It’s been a bumper year for gaming on the go. For a spell, it kinda felt like Nintendo was the only name in town, but it’s since become one of the more exciting corners of gaming. Today, there are handheld options for everything from AAA to Indie to retro and beyond. Whatsmore, the current generation of mobile processors means we’re seeing surprisingly capable hardware. The main problem, now, is that the software side of things hasn’t quite caught up. There’s perhaps a no better demonstration of this than the Ayaneo Air Pro: a stellar example of what can be done, and what needs improving, in the burgeoning handheld PC world.

If you’re not familiar with Ayano, that’s understandable. The company hasn’t been around all that long, but it’s already making a name for itself thanks to remarkably good hardware that brings PC gaming into the portable realm. If you imagine a Steam Deck, but with Windows and a fraction of the size, you wouldn’t be far off.

Before we dive into the gaming experience, the hardware itself is worth a closer look. The Air Pro is impressively well-made. It has a similar footprint to Nintendo’s Switch Lite, but it’s thicker (.85 vs .55 inches) and heavier (.88lbs vs .55). In terms of build quality, honestly the Ayaneo feels far superior. The Hall effect analog sticks and triggers are smooth with a nice amount of travel. The D-pad is responsive and the buttons are the right kind of snappy. The centerpiece is the stunning 5.5-inch OLED display – a first on Windows gaming handheld Ayaneo is fond of reminding us of. It’s a delight to hold and feels premium in almost every regard. Even the fingerprint reader in the power button somehow adds a dash of sophistication.

As this is basically a PC, there are quite a few different configurations available. Some use AMD’s 5560U chipset and others run the 5825U with assorted amounts of RAM and storage depending on your budget. And you will need a sizable budget as you’ll soon find out.

The Air Pro doesn’t quite have the grunt of Valve’s venerable Steam Deck, but it does run Windows 11 out of the box and can run a surprising amount of high-end games in a more-than-playable fashion. And while the Steam Deck outguns it in terms of processing power, the Air Pro is legitimately portable without too much of a performance tradeoff.

Beyond size and the internals, the other main difference is price. Valve’s handheld tops out at $650 for the 512GB version while the Air Pro starts at $699 (5560U/16GB RAM/512GB storage). You can bring that figure right up to $1,399 if you want the faster silicon, 32GB of RAM, and 2TB of storage – that’s obviously quite spendy. The model we tested was somewhere between middle and top with the superior processor, 16GB of RAM, and 1TB storage (though all models have expandable memory via a microSD card slot).

There are other gaming handhelds that run Windows, but many are too underpowered to handle a lot of bigger games. Alberni’s Win600, for example, runs on an older AMD Athlon Silver 3050e chipset with Radeon Vega 3 graphics. This is a significant step-down, but then the Win600 only costs $375. Ayn’s Odin can also run Windows, but the ARM-based version which brings with it some compatibility issues. GPD has been in this space for a while, but its Win 3 is looking a little underpowered now (though its Win 4 is coming this month and it looks suitably beefy).

Perhaps most tellingly there are many more handhelds in the works from companies like Ayn, the aforementioned GPD, and others. There’s even a new flagship from the company itself, the Ayaneo 2, that really should cause potential Steam Deck buyers some headaches. These un-released models all have something in common: AMD’s 6800U chipset. It seems there was always an appetite for PC gaming on the go, it just we didn’t quite have the required hardware to run it. Until recently.

Technical limitations are one thing, but there’s another more philosophical question that needs answering: Why make a pocketable PC when you can stream a lot of AAA games without the need for expensive, power-hungry dedicated hardware? While it’s true streaming is more viable than ever, that approach requires that you have a console or gaming PC in the first place or a subscription to something like GeForce Now or Xbox Cloud which isn’t economically favorable for many folks (not to mention the libraries might not have what you want). Not to mention its dependence on a network connection – good luck with that on in-flight WiFi.

This brings us back to the real issue: Windows isn’t ready to be used on tiny screens and neither are many of the games that run on it. Ayaneo has tried hard to ameliorate this issue by adding its own launcher called Ayaspace. It serves as a front-end for all your games and manages to provide a vague console-like experience. But it’s not long before the spell is broken and you find yourself using an analog stick as a mouse trying to log in to Steam and then using a tiny onscreen keyboard to peck out your credentials.

Ayaneo has at least tried to solve some of these inevitable problems. The Air Pro, for example, has two buttons along the top (between LB and RB) that will pull up the onscreen keyboard, double for ESC, and other essential Windows shortcuts to make navigating bearable. But you will likely need to plug in a mouse and keyboard at some point just to get something simple done.

It’ll also soon become apparent that AAA games weren’t necessarily made with a small screen in mind. For the most part, games look incredible on the Air Pro’s OLED display. Even when playing games at 720p (the display is 1080p) they still look incredible – but it’s often a necessary tradeoff for performance. You will likely find yourself wishing that the display was just a little bit bigger. Not least to get rid of those bezels, but just for general quality of life.

Not least for games where there’s a lot of text. Titles like Disco Elysium, for example, have a lot of written dialog – and while it’s easy enough to read, for the most part, it’s noticeably more fatiguing than if you were on a desktop. Thankfully, the display is sharp and the resolution is high enough that it’s all still very legible, but there’s just that vague sense of a UI that wasn’t built for a display of this size.

If you’re thinking “Why not just run SteamOS on it” you wouldn’t be alone. It’s been done with varying degrees of success. The bigger issue might just come down to the practicality (millions of games available, wide hardware support) and reach of Windows. There are some more mundane challenges with SteamOS that don’t make it a shoo-in replacement for these handhelds. Primarily, game compatibility. If it’s not available on Steam, you can probably still install it on SteamOS but it might involve flipping to desktop mode or other workarounds which break the “console” experience you might have been seeking in the first place.

More importantly, some users are actually reporting better battery life with Windows on the Steam Deck despite expecting it to be worse. The claims are that it’s broadly equivalent but in some cases even better than Valve’s native operating system thanks to a combination of factors. PC gaming has a lot of variables, so this isn’t necessarily that surprising. This isn’t always going to be the case, but it’s at least not a strong incentive for making SteamOS the go-to platform for portable PC gaming.

Battery life is especially important with a handheld and it would be a lie to say it’s something that the Ayaneo Air Pro excels at. Or even does adequately. Depending on what you’re playing and the power drain – usually called TDP – required for it to run satisfactorily. More demanding games will need a TDP of 12 Watts or above and you can hope for about an hour and 45 minutes of battery life at this intensity. Some games can run just fine at 8W which will extend the play time to around 2.3 hours. You can get over three hours of life on the lowest 5W setting but this won’t be enough for anything but the lightest of games it’s good for general setup tasks and the like.

Needless to say, this isn’t ideal for a handheld, especially as your battery pack likely won’t cut it – unless it can deliver 65W, which most can’t.

In short, the Ayaneo Air Pro represents a lot of hope and shines a light on some challenges. Hope that true PC gaming on the go in a pocket-friendly format and on fantastic hardware, feels like it might finally be here. It’s the challenges that are a little more complicated. Windows has a lot of advantages, but also plenty of practical drawbacks. Whether it’s a case of adapting the hardware around these, or just a matter of a smart software overlay is being figured out in the real-time it seems.

Making a truly “console” experience will require some clever thinking and equally clever software. Ayano, for its part, is also working on its own Ayaneo OS that’s Linux-based like SteamOS. Whether this will resolve some of the challenges remains to be seen, but it’s clearly something that’s being worked on. But that just accounts for one company. With other manufacturers with ties to Windows like GPD, there’s a risk of ending up with a mishmash of approaches. Hopefully, though, with more competition comes more innovation (or more ideas to be “borrowed”).

For some, the exciting part is to finally have more options to enjoy high-end gaming away from the PC. Not everyone is looking to spend more time at a desktop, or maybe you just want to scratch that Elden-itch while waiting for a flight. Whatever your preference, things are about to get a lot more interesting.