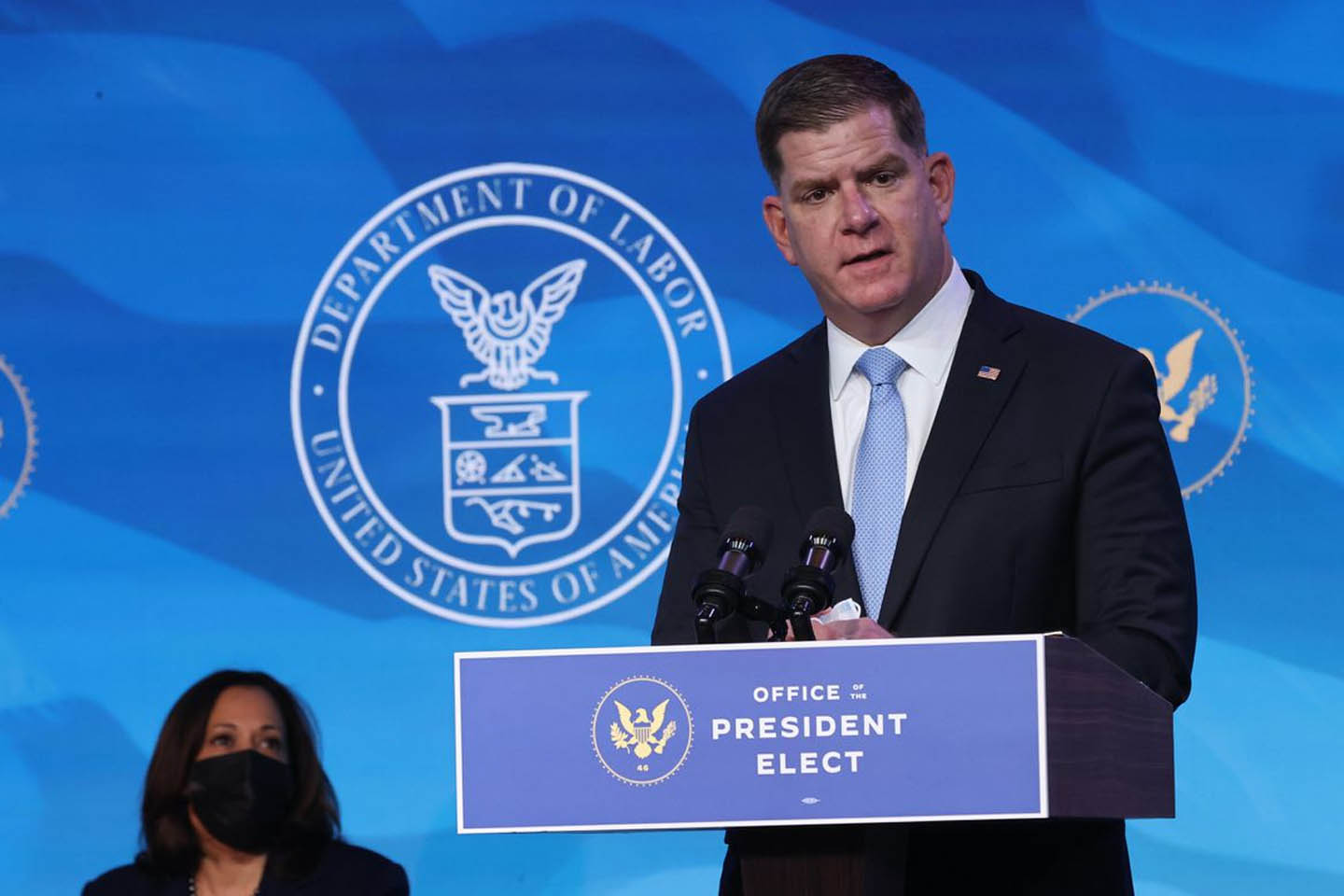 Recently confirmed Labor Secretary Marty Walsh will be the first union member to head the U.S. Department of Labor in half a century.

Given Walsh’s extensive union background, labor-management issues such as the unionization push among employees at an Amazon warehouse in Alabama will be front and center during his tenure as the Labor Department’s new leader. It’s also expected that Walsh’s leadership of the agency will prompt a crackdown in the enforcement of wage-and-hour laws and workplace safety regulations, among other worker-friendly policies.

According to a post on law firm Fisher Phillips’ blog shortly after Walsh was nominated in January to lead the Labor Department, “Many view Marty Walsh as a leader who aims for pragmatic solutions to problems and strives for unity and consensus-building. His first allegiance, however, will be toward workers. ‘Working people, labor unions, and those fighting every day for their shot at the middle class are the backbone of our economy and of this country,’ Walsh said in a tweet soon after Biden announced him as the nominee. ‘As Secretary of Labor, I’ll work just as hard for you as you do for your families and livelihoods. You have my word.’ ”

Kevin M. Young, a partner in labor and employment in Seyfarth’s Atlanta office, Jason E. Reisman, co-chair, Labor and Employment Practice Group, for Blank Rome in Philadelphia, and Christopher D. Durham, partner in Duane Morris’ Employment, Labor, Benefits and Immigration Practice in Philadelphia, offered their thoughts on what employers should expect as Walsh begins his tenure as the new Labor secretary.

Durham said employers can expect the Labor Department to more vigorously enforce employment laws through audits, investigations and court actions against employers, contrasting with the Trump administration’s focus on securing employer compliance through education, outreach and other less adversarial means.

“These shifting enforcement priorities will be supported by regulations and sub-regulatory guidance that is more protective of employee rights than the generally business-friendly interpretations of the prior administration,” Durham said. “We have already seen examples of this regulatory shift in the DOL’s moves to undo the prior administration’s regulations on joint employer status and tipped-employee wages.”

Young pointed out that while the Labor Department under Trump was not as light on employers as some might assume — the Wage & Hour Division set a new record for back wages recovered in 2019 — it took a softer approach than previous administrations on the topic of damage enhancements. Liquidated damages, which is a penalty in an amount equal to back wages owed, were taken off the table in all but the rarest cases, he said.

“The new administration has reversed course on that issue, and it’s likely that other enforcement measures will reenter the picture, too,” Young said. “It’s not clear yet whether the number of investigations will increase — that depends on the budget as much as anything else — but employers should certainly be preparing for more aggressive investigations than in past years.”

Reisman said that although Walsh was confirmed with strong bipartisan support, employers should expect his reputation as someone who is a consensus-builder to be tested early with so many critical items on his agenda, including the pandemic response and some critical Trump-era regulatory initiatives.

“There is no question, given Walsh’s labor background and leadership of the building trades, that he will be a staunch supporter of workers’ and unions’ rights,” Reisman said. “He will not want to alienate his base of union support, or that of President Biden, especially in light of Biden’s promises to empower workers and unions.”

Employers can expect a return to a Labor Department that resembles and likely surpasses the enforcement efforts of the Obama administration, Reisman said. The DOL will be back on the trail of finding violations and holding employers accountable.

“The focus will be less on assisting with compliance and educating employers and more on the gotcha game of penalizing employers who — knowingly or unknowingly — are not in compliance with the laws the DOL enforces,” he said.

Nowhere will the shift in Labor Department enforcement priorities and positions be felt more by employers than enforcement of the Fair Labor Standards Act’s overtime and minimum wage requirements, Durham said.

“I expect the number and scope of audits conducted by the DOL’s Wage & Hour Division to increase substantially, and that the DOL will not be as willing to settle violations for less than ‘make-whole’ relief for affected employees,” he said. “In addition to back wages, the DOL is more likely to insist that employers pay liquidated damages when settling a wage-and-hour investigation, and the DOL likely will increase the use of civil monetary penalties as a potent deterrent to send a message to employers.”

Employers should expect a return of the enforcement tools of the past, liquidated damages being almost automatic as penalties in wage-and-hour investigations, Reisman added. “We expect more willfulness assertions by the DOL, which allow a back wage look-back period of three years, rather than two. And, yes, the use of civil money penalties will be used more broadly as a tool than in the last four years.”

Minimum wage and the tip credit

Young said that the new administration clearly supports increasing the federal minimum wage. And there’s also little doubt that the benefit of any increase will apply for tipped workers.

“The question here is whether the FLSA will continue to allow a portion of a tipped employee’s minimum wage to come in the form of tips,” he said. “A recent federal legislative proposal would remove this so-called tip credit, requiring restaurants to directly pay the full minimum wage to each tipped employee, without credit or concern for the amount of tips they earn on the job. If passed, this could have a seismic impact on a restaurant industry that operates on thin margins and has spent most of the last year on life support.”

Fair workweek laws have swept the nation and in particular the retail, fast food and hospitality industries over the past decade or so, Young said. These laws are likely on the radar of Biden and Walsh.

One recently took effect in the president’s back yard (Philadelphia), and another has been the focus of lobbying efforts in Walsh’s home state of Massachusetts, Young noted.

“Instituting this sort of reform at the federal level would require an act of Congress,” Young said. “After all, the DOL can’t make new law, only interpret and enforce what’s on the books, and I don’t get the sense that this sort of measure is among Democratic lawmakers’ core labor priorities.”

In the past couple of years multiple local jurisdictions, including Chicago, Seattle and San Francisco passed predictive scheduling laws, with more such laws likely to hit the books in the coming years, Durham said.

Reisman also questioned whether the Labor Department will have the time or resources to make its way far enough down its priority list to fair workweek/predictive scheduling regulations, or what its authority would be in seeking an impact in that realm.

Still, he added, “Anything that would entail a nationwide policy or regulation such as paid leave could be well-received by many employers if it serves to preempt state and local laws and regulations that have created an almost unmanageable web of compliance pitfalls for multi-state employers.”